<img src="//bat.bing.com/action/0?ti=5104607&amp;Ver=2" height="0" width="0" style="display:none; visibility: hidden;">
Due to a local emergency affecting our building, we had to close our office early which means we have a limited number of staff available on our client services team. We apologize for any inconvenience this may cause.

The Historic Value Behind Silver, Gold and Other Precious Metals 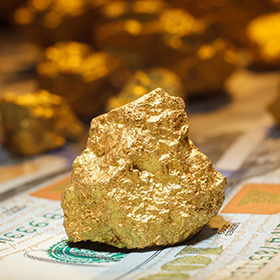 The golden glow of candles. The “Silver Bells” of song. The gelt given at Hanukkah. Precious metals play a strong sentimental role—sparkly baubles make great gifts, after all—at the holidays.

But they also play a very practical role in the global economy. Even though no countries now follow the gold standard, gold is, in effect, a form of currency. Precious metalsare essential in manufacturing modern necessities like computers, mobile phones, and aircraft. They also play an important role for investors, who value these assets to diversify their portfolios, to hedge against inflation, and as a safe haven in tumultuous times.

This article explores how certain metals – gold, silver, platinum, palladium, and titanium – came to be characterized as “precious,” and how they came to be seen as investment vehicles.

Gold jewelry carries cultural significance in many places around the world, and was for thousands of years a form of currency. It also has other, more industrial, uses: gold fillings were standard in dentistry for a long time, and it was used in traditional medical treatments. Its ability to conduct electricity makes it useful for many electronic applications, including mobile phones and computers. On a more artistic note, gold leaf adds shine to furniture, statuary, and buildings around the world.

Of the gold being mined today, about half is used in jewelry, 10% is used by industry, and the remaining 40% is held as an investment.  Much of that 40% is held by the world’s central banks, who store their liquid reserves in gold.

Silver shares with gold a long history as a store of value. But there is more silver in the world, estimated at 777,274 metric tonnes, with an estimated 3,732 tonnes stored as bullion in private hands.

Silver also turns up in jewelry and table ware (Why do you think its called silverware?) and decorative items. But today, its biggest use is industrial. Its outstanding ability to conduct both heat and electricity make it ideal for use in electronics and solar panels. It also is an important component in numerous medical and consumer products. It can be pulled into the form of wire or flattened into thin sheets. And for investors, coins, bars, and ingots are common forms for investing in physical silver.

Originally, platinum was mistaken for an impure form of gold or silver. One of the rarer elements, there are few deposits of pure platinum, and most of it is now produced as a byproduct of nickel and copper mining. While it is used in jewelry and fine watches, its resistance to corrosion makes it very sought after for industrial purposes. Today, it is an essential component in catalytic converters and an array of electrical devices.

As an investment, platinum bullion is traded in coins, bars, and ingots. Its price can rival gold for volatility, and historically has fared well during times of economic prosperity when industrial production ramps up.

Unlike gold, silver, and platinum, palladium (named after an asteroid) is considered precious only for its industrial uses. It also is one of the rarest of precious metals. With the growth of the electronics industry, palladium has become even more precious. It is used in capacitors to store electrical energy and hydrogen.

Most of the global supply of palladium is located in Russia and South Africa. This can lead to price volatility when the global political picture darkens—for example, when sanctions disrupt the relationship between the U.S. and Russia, or when labor strife occurs in South Africa.

If you have had a joint replaced, chances are you have already invested in titanium. This metal’s resistance to corrosion makes it perfect for this kind of medical use. It also is essential to the aerospace and marine industries.  As strong as steel, titanium is much less dense. This makes it ideal as an alloy agent, which is how it is used in aircraft, spacecraft, ships, and missiles. It also shows up in paint, plastics, and enamels.

Anyone who has been to a history museum is likely to have seen a display case of gold or silver coins, sometimes dating back thousands of years. These metals came into favor as currencies because they were easily portable, could be measured in standard ways, and held their value.

That last point, holding their value, is what sets gold and silver apart from paper currency. Governments can print more or less paper currency, thereby influencing its value. (Think inflation and deflation.) The world’s store of silver and gold is finite. All the precious metals in the world already exist, although not all of them have been mined yet.

This idea of precious metals as a store of value and a hedge against inflation is a point that attracts many investors.

As with any investment, the prices of precious metals rise and fall, influenced by the laws of supply and demand, by global political events, and industrial trends, among others. Historical charts of the prices of gold and silver go back centuries; those for platinum, palladium, and titanium are more recent.  And, as the small print always reads, past performance is no guarantee of future performance.

How to Invest in Precious Metals

It’s important to keep in mind, that the investor does not physically hold the precious metals and that the metals are held in a depository institution.

The Entrust Group has a dedicated professional staff in our Precious Metals Center. Contact us or read our online educational materials to learn more about precious metals investing for your retirement.

The Most Common Questions Asked About Precious Metals —Answered!
September 18, 2017