Open Letter to Grandparents: It's Never Too Late to Save for Retirement 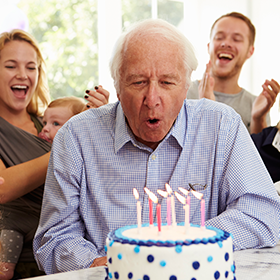 Every day can be Grandparents Day, but the official commemorative day is the Sunday after Labor Day (September 10th). It is the perfect opportunity to spend time with and care for the grandparents we love so much. For the occasion, we wrote a letter to encourage our Grandparents to think about retirement because it's never too late:

This Grandparents Day, I thought I would write you a real letter, with a real purpose, instead of just scrawling my name inside a card I found in a shop.

You’ve always said “you’re as young as you feel,” and I know from watching you play tennis and dance at my wedding last year that you both feel young. For sure you’re the youngest-looking grandparents among all of my friends. (I hope I inherited those genes!)

From the time I set up my first lemonade stand—using lemons I picked from your tree, sugar I found in your cupboard, and a card table I dragged out of your garage—you’ve encouraged me to be financially responsible. That included explaining why I owed you a cut of my lemonade stand profits in return for the “investments” you made in my little enterprise. You encouraged me to save part of the birthday money you gave me every year instead of spending it all on Pokémon cards or Legos. Your free financial advice has been invaluable.

Now I want to share a piece of advice I’m trying to follow: It’s never too early or too late to save for retirement. I know, you’re not ready to hear the R-word yet. As proud members of the Baby Boomer generation (although you just squeaked in, Grandma), your generation is rewriting the rules of retirement. Baby Boomers are working longer, working part-time in retirement, or not retiring at all. I know Grandma gets a lot of satisfaction from her job as a paralegal and they’re going to have to look hard to find someone to take you place managing the Steak House. That’s my point: Everyone needs to start saving for retirement long before they’re ready to retire.

According to the Transamerica Center for Retirement Studies®, your generation expects to rely on Social Security (34%), traditional pensions (33%), and most importantly, tax-advantaged 401(k)s, 403(b)s and IRAs as your primary sources of retirement income. But how much is in those tax-advantaged accounts? Probably not enough. One recent study by GoBanking Rates, found that one out of three Americans has no retirement savings whatsoever. Even those with savings have put away less than $10,000. I know you’ve done a better job of retirement saving than either of those groups. I just hope you’re among the 51% of Americans who are confident they’re saving enough for retirement.

But I’ve also heard you say that a dollar doesn't go as far as it used to. (I could easily charge a buck a glass for lemonade now—two bucks, if the lemons were organic!) I read a list on CNBC not long ago that detailed how long $1 million will last in retirement. The good news is that it would last 26 years if you lived in Mississippi. The bad news is that you don't live in Mississippi. And if you want to live out your retirement in Hawaii, that $1 million wouldn’t even last 12 years. Luckily, I know you want to retire close to home (something that makes us all very happy), so those two extremes don’t apply to you.

Since I may already have stepped on your toes telling you what you may already know, I may as well ask you about health care. I know where you stand on Obamacare, and I respect that. But, regardless of what our health care system looks like most retirees drastically underestimate what they will have to spend on health care, according to HealthView Services, If you include the typical out-of-pocket costs not covered by Medicare, the average healthy 65-year-old couple today can expect to spend a whopping $377,000 on healthcare in retirement. Now, I know that that two of you are healthy, but take it from the one who broke a very expensive elbow taking the dog for a walk – there are no guarantees of good health.

Another way your generation is setting expectations for retirement is by taking more control of how you save for retirement. In addition to making sure you contribute to your employers’ 401(k) or 403(b) plans and maximize the employer contribution, your generation owns IRAs: 69% of households that own IRAs are headed up by a person aged 45 or older; 40% of them age 55 to 64.

And not just any kind of IRA, more and more people are saving with self-directed IRAs that put you in control of the assets you own in your retirement savings account. You can invest in what you know best, anything from real estate to precious metals. Here’s just a short list of the alternative investments you can own in a self-directed account.  Pretty cool, huh?

How do I know about all of this? I did it myself. I talked with an Entrust professional and decided to open a self-directed IRA. It took about 10 minutes online.

Anyway, that’s what I wanted to say. I hope you think this message is more worthwhile than a card. Maybe you can print it out and stick it on the refrigerator like you used to do when I sent you letters from camp.

Next The Most Common Questions Asked About Precious Metals —Answered!