Partners in a Real Estate IRA Having made handsome profits over the years, Michelle and Charles's plan accounts climbed above $3 million each.

When they both chose to semi-retire at ages 56 and 55, respectively, and their earned income dropped to zero, they decided to convert large portions of their respective qualified plans to Self-Directed Roth IRAs. Their goal was to live off income from their Roth IRAs when they turned 59 1/2, because at that age they would not incur any penalties for taking tax-free distributions.

To accomplish this they first converted significant portions of their Keoghs into traditional IRAs, and then converted these to Roth IRAs. They paid the appropriate taxes due from the Roth conversions out of personal funds.

To get them closer to their retirement goal, Michelle and Charles decided to purchase a single property to be developed as a strip mall.

Bruce, an experienced developer they knew well, found a perfect property that would come in slightly under $2 million after acquiring the land and developing it, as well as factoring in architect's fees, contractors' fees, and, of course, Bruce's fee. The resulting income on the property was estimated to have a capitalization rate of 7.75 percent.

Because Michelle, Charles, and Bruce were unrelated persons and did not own any part of a business together, they were in little danger of conducting a prohibited transaction.

Here is how the process worked, phase by phase.

Purchasing land in the Real Estate IRA o acquire the land, priced at $ 500,000, Entrust executed a purchase contract on behalf of the Roth IRAs as undivided interest-50 percent each. Michelle and Charles completed Buy Direction Letters from Entrust as well as the contract.

The Real Estate Roth IRAs contracted with Bruce to build the property for $1.5 million, with these funds divided equally between the two Roth accounts. The contract stipulated 120 days for completion of the project after permits were obtained.

Obtaining the Standby Letter of Credit

The The $1.5 million build out was guaranteed by a standby letter of credit to the Roth IRAs from a private lender. This allowed for the $1.5 million to be used for other investment purposes during the permit process.

The debt financing would only occur if cash funds were unavailable once the permits had been obtained, at which point the creditor would encumber the property held by the Roth IRAs. If cash was available, the debt financing would not be required. Because the Roth IRAs in fact paid a fee to obtain the standby letter of credit, the transaction was considered debt-financed.

As Michelle and Charles were not eager to sell the property upon completion, the debt-financing component was not a problem. They were confident their Roth funds would not fall short once the permit process was complete.

Even if their Roth accounts needed to draw on the letter of credit, Michelle and Charles believed they would have cleared out any debt-financed property obligations at least 12 months prior to a possible sale. This would eliminate any unrelated debt-financed income tax, since Unrelated Debt Financed Income Tax does not apply if the asset is out of debt for the previous 12-month period before the sale.

The permit process for the strip mall took almost six months. Bruce then had another 120 days to complete the project, per his contract with the Roth IRAs. Meanwhile, the land owned by the Roth account continued to appreciate, with values climbing about 11 percent that year. Bruce lined up an anchor tenant, a national-brand retail clothier who liked boutique locations.

During the development, Bruce had Michelle and Charles approve "draws" from their respective Roth IRAs using the standard builder control five-draw system, which provides for the release of funds to coincide with various stages of construction.

Entrust, acting as the builder control for the draws, was paid an additional fee from the Roth IRAs. Although the standby letter of credit was never used, the Roth IRAs still paid the related fee of 1/5 percent.

Bruce handled all subsequent income and expenses for the strip mall, and sent the net checks to Entrust to be credited to Michelle and Charles's respective Roth IRAs

A couple of years later, Bruce decided that he wanted to own the mall himself, since it fit nicely into his long-term financial plans. But because he had provided services under contract to the Roth IRAs of Michelle and Charles, he considered himself a "disqualified person" and therefore could not make the purchase.

However, a clause in his initial agreement with the IRAs allowed him to act as a broker for the sale of the property, and to charge a fee for such services. A fellow developer, Paula, who was not a disqualified person, liked the property and made a $4.75 million offer to the Roth IRAs. Accepting the offer, Michelle and Charles each prepared a Sell Direction Letter and sent them to Entrust.

After the sale to Paula was completed, the Roth IRAs, which had each started with $1 million, had more than doubled in value. This worked out to an annual return of slightly more than 25 percent, never to be taxed again. Adjusting for taxes paid, and an income of 9 percent on the amount of tax on $500,000 for three years, the return was closer to 18 percent per year.

Michelle and Charles had always intended reinvestment to be a part of their strategy. After the sale of the strip mall to Paula, they directed their respective Roth IRAs to become lenders to Bruce for his other development projects. They each prepared a Buy Direction Letter for Notes in the form of a letter of credit that Bruce could draw on regularly.

Bruce in turn paid them 12 percent annually on notes secured by first position on real property that he was developing. It was cheap money for Bruce from a reliable source, and terrific tax-free income for Michelle and Charles from their Roth IRAs.

When Michelle and Charles reached 59 1/2, they each began receiving distributions from their Roth IRAs. They prepared distribution requests and sent them to Entrust for execution. Entrust sent them the requested funds and a 1099-R with a reason code of Q (indicating a qualified Roth IRA distribution).

If you have any questions about partnering in a Real Estate IRA, please contact one of our trained specialists.

FIRE + Self-Directed IRAs: Heat Up Your Retirement Plan with a Tax-Advantaged Account
June 30, 2022

Next 6 Pre-Retirement Tips for Your 20s 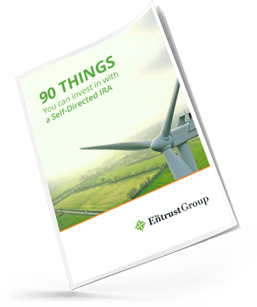