How Retirement Accounts Are Impacted By Divorce

By The Entrust Group, Jul 28, 2017 , in Alternative IRA Investments 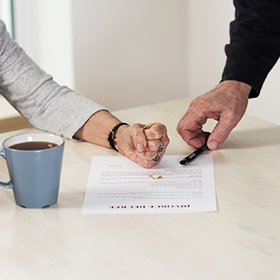 Divorce is a topic not often discussed by retirement account administrators or investors. According to the Population Association of America, currently, 22 percent of women and 21 percent of men have ever been divorced in 2016. If current divorce trends continue along the same tracks, it’s something that needs to be spoken about. What happens to an IRA or Individual 401(k) during a divorce?

The answer varies by the type of retirement plan and effects of additional variables, such as state law. But in most cases, it is split up along with other assets and property, through the negotiations by both parties and defined in a document called a Domestic Relations Order (DRO).

Marriage (and divorce) is regulated by individual states. Meanwhile, retirement plans fall under federal law. And according to federal law, only marriages that are legal under the law of the state in which the marriage took place may be recognized when filing a claim to an individual’s retirement plan assets. The first step in determining which portions of retirement plan assets go to the two parties is to decide whether the non-account owning spouse wants a share of the retirement account, or trade his or her share in that account for assets of equal value. This is called the present-day valuation buyout. The other assets can be cash, stocks or property, which is more easily transferable than a retirement account. A division of the retirement account into two accounts is more common, but once again, there are multiple variables.

For 401(k)s, this division must include a state court-ordered Domestic Relations Order which need to be qualified by the the plan’s Plan Administrator before releasing funds thus the term Qualified Domestic Relation’s Order(QDRO).This document instructs the retirement account administrator how to divide an individual’s retirement account. The court order must be very clear about how the account will be split , how much money will be transferred, and to whom the assets are to be awarded. Although obviously in a divorce situation it would be the ex-spouse, a QDRO may award to a different party, such as a child or a parent.  A QDRO gives direction for the funds in a retirement account to be separated and possibly withdrawn.  If they are withdrawn, the distribution will not be penalized. If the recipient is the ex-spouse they may also redeposit the funds awarded into their  retirement account, which could be his or her own 401(k) or IRA.

It is the recipient’s duty to decide what to do with the money received through the QDRO. The recipient may:

Internal Revenue Code §408(d)(6) dictates that the division of an IRA in a divorce allows for the ex-spouse/alternate payee to transfer the assets to his or her own IRA  without  incurring any taxes or penalties. There are two basic transfer methods for divorcing couples:

It is important to consult with attorneys and tax professionals before making any decisions on the division of retirement accounts in the case of divorce. Entrust does not endorse any one division choice for our clients.

Divorce is stressful and never an easy process to handle, but it is important that you understand how your IRA or retirement future may be impacted. To learn more about how self-directed retirement accounts are impacted by divorce, contact us

Who is Considered a Disqualified Person? (Infographic)
January 10, 2019

Previous IRA Academy: An Example of Our Dedication to Education

Next 5 Smart Tips to Help Your Private Placement Investment